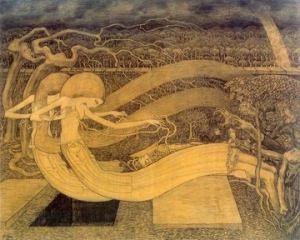 The changeling’s off degrees from centre stage;
Regrets but he neglects quitting early, spurns all but firm resolve
To be what he must be and in evasion and denial dissolves
In endless traction in the newborn age
That leaves him far behind,…or so he dreams.
He is the less for it; it’s true, but greater in the breach,
He leaps or lunges toward such goals as were never his, the reach
Beyond what was intended only days ago. Hours, he deems
His monumental costs delayed as what amount to pearls strung, displayed–
Themselves but miniatures, schemes so grandiose that rival truest choice
In actions innocuously exposed as are his works that cannot find a voice–
The either side of which are more commanding than the plays,
Themselves, no more nor less demanding on the patronage of audience:
Such bubble baths of bathos spawn endless hopes, awash in incidental arrogance
and to within an inch of anger and doomed, perhaps, to decadence.
“The child’s fallen through the cracks,”
They say, and sure, he knows it! Neither factions
Nor an infinity of purple lines, nor silence as a sanction
bring his thinking past the moment of attack,
The root, the centre of delight and gravitas
And at that age? Amazing! Teachers raise
Their hands and he applauds the praise
Of cause to no effect. He will salute the animas
Of every passing spark without a thought
To ground the notion. Lightning strikes
Inevitably–obverse of confirmation– to light
A path to pains that cannot be contained nor bought
And wonders how it is that others neither flatten nor allay
His ignorance and, leaving, lay to waste his salad days,.
The catalysts detached, and safe from harm and apathy
Reduce integrities to nothing more than sport. Liabilities, he earns; enjoined
Or praised: he treasures troubled space but only when purloined,
And, bowing low, he surgically removes the parasites of hosts. Relief
From all that’s supine trumps perception of the hand that’s dealt with deft
Disclosure hidden in the modus. Others merely operate and analyse;
The oil they seek is crude; his sensibilities refine the blatant lies,
And all those wisdoms as from boils are drained. The bereft
No longer fool the wwise, nor falsely warn the fool!
His simple confidence entrapped, he walks away, displays no sympathy
For maudlin sentiment, and, drowned–as was Voltaire!–
in trivial pursuit, antithesis, and antipathy,
He confidently scorns all suckers born upon  A ferial day; the hours cooled
In cauldrons, the stench of raw indifference is masked in nosegay;
Satisfactions realized, the succubus smiles and simply steals away.